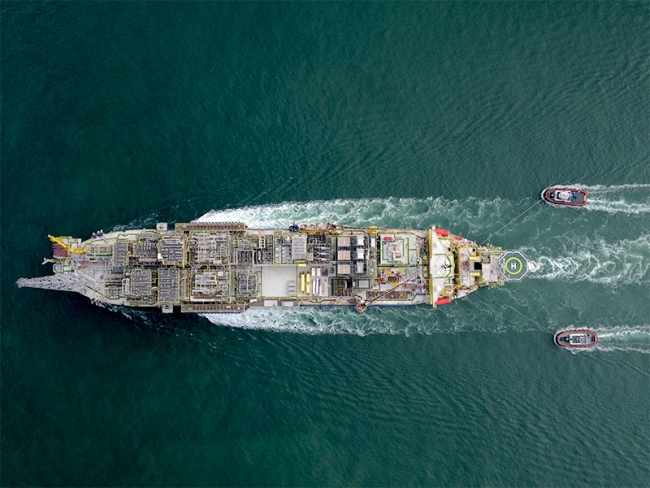 The challenge in context

An FPSO is a Floating Production Storage and Offloading unit designed to produce oil and gas by processing the fluids arriving from offshore wells, usually in deep-water environments. Therefore, FPSOs have the capability to store the produced oil until a separate cargo offloads it from the FPSO tanks.

Such kind of operations provoke a certain vaporization of the lighter oil components, which occupy the space on top of the oil. Often, this gas contains as well droplets of oil which are carried over. So, this gas is both a source of VOCs (Volatile Organic Compounds) when vented, and a leakage in FPSO’s oil production.

For this project, our client, one of the leading FPSO operating companies worldwide, asked us to develop an approach to calculate the amount of VOCs generated during cargo tank operations. At present, the flashed gases on these regular operations are sent to atmosphere. The objective of the project was to study the amount of VOCs generated and their emissions from the FPSO tanks in order to evaluate the options for the recuperation of these gases through a compressor, that would result in a reduction of the VOC emission as well as on enhanced oil recovery. These analyses were carried out with the help of the simulation models already developed by Inprocess for the Operator Training Simulators in two of client’s FPSOs (one operating in Asian waters, and another one, operating offshore Ghana). The dynamic simulations helped to evaluate how much gas was vented and flared due to routine operation of the internal oil tanks

Inprocess built the dynamic model, replicated the operations, and calculated the gases flows and emissions. To increase accuracy, the existing steady state model was rebuilt in order to emulate better the physical properties of the oil at the rundown to replicate with higher level of detail the operation, based on the present operating conditions. Cargo tank load is usually carried out in three or four days, which means that the dynamic simulation model must be able to run fast without losing accuracy.

Thanks to the accuracy of the models developed by Inprocess it was possible to:

The dynamic simulation study carried out also served to the objective of calculating the benefits of recuperating that gas emitted during operations. This study for two FPSOs provided an analysis of the amount of gas that is vented and flared as a result of common operation of the internal oil tanks, based on dynamic simulation.

Going the extra mile: In this case, the LP/MP Flash Gas Compressors were not working propoerly. Our project team provided an extra hypothesis and analysis as to why these compressors could not start based on the historical data, equipment capacity, control valves size and the verification using the steady state and dynamic simulations.

Inprocess' long list of satisfied clients is a clear demonstration of the value that we have been capable of providing to our customer along the recent years. Dynamic simulation is our core business and one of our main differentiators but, in all cases, our domain expertise is always shared with our clients in our projects. Such a policy builds confidence and trust in us and facilitates the return of clients when looking again for additional value and solutions which they already know that can be obtained from our services. That was the case for this FPSO constructor who, after having benefited from our approach to Multi-Purpose Dynamic Simulation while building and starting-up the ships, it returned to us to receive this kind of support during Operations.

Interested? Don’t hesitate to ask for more information just completing the form below